PROs: Kia Optima 2015 is a midsize offering plenty of space to all sorts of occupants. In terms of style, it’s definitively in the groove with a very modern look. Here’s a comfortable car that has a welcoming allure. Even after four years, the Optima doesn’t look its age and stacks up nicely compared to other midsize sedans that have either gone under the knife or been given the chop. It goes to show just how sharply effective the pencil of design chief, Peter Schreyer, has always been. In terms of mechanics, two 4-cylinder as well as one hybrid powertrain models are all up for grabs. Better yet, the Optima behaves like a European thoroughbred on the road. 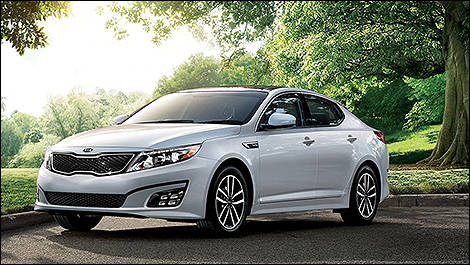 CONs: Nevertheless, it’s not all cloud nine…the 2015 Kia Optima has some minor annoyances. For backseat passengers, head space seems a bit limited. On the driving side, let’s just say that the turbocharged 4-cylinder will be a regular visitor to to the gas pump if you like putting the pedal to the metal. Finally, those opting for the hybrid version will find their trunk space somewhat curtailed by the battery pack.

Improvements and Changes: With a silhouette that may well morph into another shape in 2016, the 2015 models are keeping up with current appearances, so no major changes.

2015 Kia Optima Powertrain: Under the hood of the 2015 Optimas, Kia offers a choice from the range of 4-cylinder all aluminum engines. First, a 2.4L DOHC delivering 192 hp and 181 lb-ft of torque. Second, a 2L turbocharged DOHC generates 274 hp and a torque of 269 lb-ft. Finally, the hybrid consists of a 2.4L 4-cylinder Atkinson cycle engine plus an electric engine whose combined power reaches 199 hp. All models come with automatic 6-speed transmission, so no CVTs for the 2015 Optima models.

Cargo Capacity: The Optima provides 487L of storage space. However, that drops to 305L if you choose the Hybrid (because of the battery pack).