Dana Point, CA — The Kia Sedona was a latecomer to the van wars, and has made up for lost time. “Sedona” may not be the household word that Grand Caravan is, but Kia intends to challenge that with the new 2015 iteration. This van has made huge leaps forward in quality, ranking just below Toyota in defects per 100 vehicles, and well above Ford. Kia intends to take on both the volume leader (Grand Caravan) and the quality leaders (Toyota Sienna and Honda Odyssey). After driving the 2015 Sedona, I think they are ready.

What is a Kia Sedona?

The Kia Sedona is a seven- or eight-passenger minivan that is versatile enough to be considered a Multi-Purpose Vehicle (MPV). The all-new platform has more high-strength and ultra-high-strength steel than the previous generation, making the chassis much more rigid. Kia was able to do this because they own their own steel mills and all of the steel and a significant portion of the powertrain were all manufactured in-house.

Kia has given the Sedona a broad market appeal by providing seven trim levels that span in price range. The basic Sedona L is considered a value leader and starts at $27,495. Trim levels in this grouping include the L, LX and LX+. A midrange Sedona starts with the SX and the additional trim level is the SX+. At the top is the SXL with the SXL+ doing duty as the premiere trim level coming in at $45,995.

The Sedona L may come with steel wheels and wheel covers, but the cloth interior, standard back-up camera and very comfortable seats mean there is no wrong decision when trying to decide which trim level to purchase. Move up to the SXL+, the cloth has become leather and the front bucket seats are both heated and cooled. In addition, an Infiniti sound system, GPS, satellite radio, and connectors for most personal entertainment devices are included.

Kia provides one powertrain, namely a 3.3L GDI (gasoline direct injected) engine that puts out 276 horsepower and 248 lb-ft of torque and is mated to a 6-speed, electronically controlled automatic transmission. The trim level doesn’t affect driveability very much. However, fuel economy does change depending on the trim level. The L and LX models are rated at 13.2L/100km in the city and 9.7L on the highway. The SX and SX+ are rated at 12.9L and 9.5L/100km for city and highway, respectively. The SXL and SXL+ are 14.2L and 10.5L/100km. Kia explains that the differences are due to electric power steering on the SX and SX+ versions, while the SXL and SXL+ versions carry extra weight due to increased equipment levels. 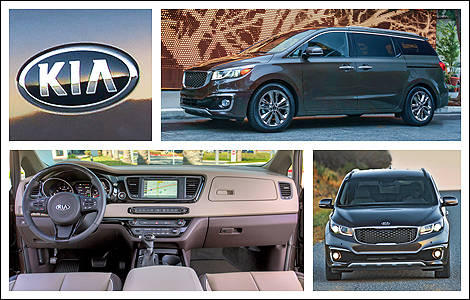 Everyday driving is what the Sedona does best. Visibility is excellent all around. The engine has enough power that changing lanes in traffic or getting up to speed on an on-ramp will never be an issue.

Inside and Out of the 2015 Kia Sedona

Designers managed to give the 2015 Sedona a much more powerful looking stance than the previous generation while making it look balanced and comfortable. Kia installed its traditional style grille up front, while the rest of the front fascia is designed to minimize the drag coefficient (down to .33) which helps provide better fuel economy. At the rear, a clean and smooth fascia incorporates large taillights as well as a full-height liftgate.
Inside, the SXL interior has leather-faced bucket seats up front and in the second row. A third row of leather (which can fold into the floor) can hold three if they are friendly. Second-row seats do not fold into the floor. Kia engineers found that they could not make “stow and go” seats as comfortable as the method they chose which has been dubbed “Fold and Stow.” When needed, a single actuating lever lets the seat slide forward and stand up against the backs of the front-row seats.
All the expected electronic items are present at various trim levels. Bluetooth™ is standard on all but the base L model, as are inputs for most personal music players. The only item not provided from the factory is a dealer-installed rear entertainment system.

Given the price range of the Kia Sedona, the main competitors would be the Dodge Grand Caravan, Honda Odyssey, and Toyota Sienna. In terms of value for every dollar spent, the 2015 Kia Sedona is more than competitive at all levels.