The 2015 Kia Sorento is a sharp-looking midsize CUV with more class and refinement than its logo or base price suggests. It boasts a smooth, powerful V6 engine, and displays good manners on the road. Oh, and Kia’s UVO infotainment system is pretty slick, too. A great pick for families, with plenty of value and available 7-passenger flexibility.

On the other hand, the front seats lack padding and the available third-row bench is tight and eats up trunk space. Some will say fuel economy and towing capacity could be better.

Last year the Sorento received an extensive makeover inside and under the hood. For 2015, the Sorento continues with only a few minor improvements designed to make it even more appealing to tech- and fashion-conscious buyers.

The front grille is somewhat different, with either an anodized silver metal or black mesh appearance. The lower bumper also has been opened up and gets a cross-hatched intake, while the lights have all been tweaked. For 2015, enhancements to the 4-cylinder engine provide greater fuel efficiency. 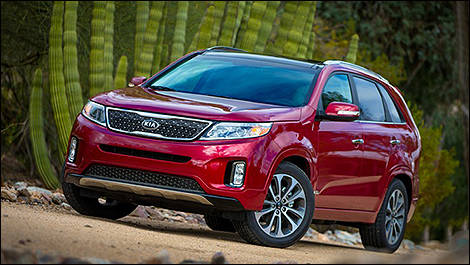 Power is routed to either the front wheels or, optionally, to all four wheels using an enhanced Torque On Demand all-wheel drive system that seamlessly directs power to the tire with the most traction and now includes Torque Vectoring Cornering Control (TVCC) for added stability under certain driving conditions. A well-sorted 6-speed automatic transmission with manual mode completes the equation.