Kia will use the upcoming Paris Auto Show to introduce several new products including the Soul Magma concept. So far, the automaker has released a single image of the car, which was penned by Kia France and could be sold over there in very limited numbers. 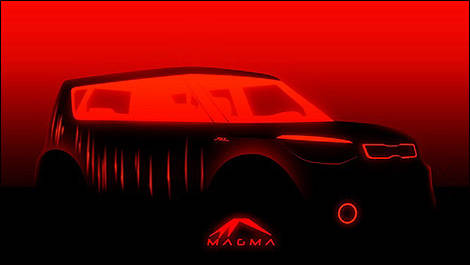 Following its world debut in Korea, the all-new Kia Sorento will have its European premiere in Paris. The redesigned Kia Rio and Venga as well as the Optima T-Hybrid concept will also be on display.

About that last one: Hinting at a future production model, it features a 1.7L turbodiesel engine mated to a small electric motor and a 48V lead-carbon battery pack. Kia estimates power to be up 15%-20% over the current 1.7L diesel unit.